Why quiet quitting is a sign you need a new job

When Liz Truss said British workers needed ‘more graft’, she hit a raw nerve. That’s because people are working. And hard. For the last few years, we’ve worked through the global COVID-19 pandemic, new working patterns, and a rising cost of living.

What is happening is that tired, overworked, burnt-out professionals have taken stock of their jobs, work-life balance and their employers. Some opted early on to change roles and became part of the so-called Great Resignation.

The term “great resignation” was coined in 2021 by Anthony Klotz, an associate professor of management at University College London when he predicted an exodus of American workers from their jobs, prompted by burnout and the freedom of working from home. The Labour Force Survey in November 2021 showed that, of the 1.02 million workers who moved jobs between July and September 2021, 391,000 of them had resigned – the highest number recorded.

Gallup’s global workplace report for 2022 revealed that 9% of workers in the UK were engaged or enthusiastic about their work, ranking 33rd out of 38 European countries. A "Work Happiness Score" survey by Indeed found that only a third of UK workers are happy in their jobs, which leaves plenty of unhappy employees

Many workers have resigned, but others have become quiet quitters. ‘Quiet quitting’ is the newly coined term for when employees only do the job that they’re being paid to do, without taking on any extra duties, working extra hours (or minutes), or participating in extracurriculars at work. Stateside, ‘Quiet quitters’ make up at least 50% of the US workforce, Gallup findings reveal.

The drop in engagement began in the second half of 2021 and was concurrent with the rise in resignations. The decline was related to the lack of clarity of expectations, minimal opportunities for training and development, feeling undervalued, and a missing connection to the organisation's mission or purpose - signalling a disconnect between employees and their employers.

Is quiet quitting the answer?

Quiet quitting is an alternative to quitting. If your quiet quitting is in response to feeling undervalued, overworked, not having a life-work balance or feeling there is no room for career development, quiet quitting might be the sign you need for a new job.

It might be saying no to projects that aren’t part of your job description or you don’t want to do, leaving work on time, or refusing to answer emails outside of your working hours. You might not have even made the decision to quietly quit. It could be a simple mindset shift that’s not noticeable to your colleagues but enables you to feel less mentally and emotionally invested in your job. The notion of setting boundaries at work to better enjoy life might sound sensible and logical – but experts advise proceeding with caution.

Why quiet quitting is damaging your career

There are risks attached to taking this approach to your career.

Can it be fixed?

Could whatever is causing your disengagement be fixed by expressing your concerns to your line manager? Whether your work-life balance isn’t right, the remuneration isn’t meeting your needs, or there’s no support to progress, have a conversation with your manager before deciding to disengage from your role. Are there specific aspects of your job that you’d like to tweak? Actively pushing for these changes could make you feel more engaged.

Quit while you’re ahead

It’s worth considering whether, rather than quietly quitting, you’d be better off quitting. Quietly quitting is often a sign that it’s time to move on from your role. If you’re reducing your effort to the bare minimum needed to complete your work, your heart is no longer in the role or the organisation.

Are you having issues with your job, or the idea of work as a whole? If it’s the former, it’s time to consider a change of jobs – there will be something that you enjoy.

If you’re actively looking for other jobs, you may be fully engaged in the quiet quitting process. There are many things you can do when job hunting to ensure your manager and colleagues don't find out. Searching for a new job while still in your current role has many advantages. You can be more relaxed about your finances, and you can take the time to find the job you want the most.

A guide to job hunting in November

How can employers solve the quiet-quitting process?

Why hiring, not firing, is key in Q4

Meraki Talent is delighted to work in partnership with Spartans Community Football Academy to provide Christmas presents for disadvantaged children in Edinburgh.

Can you help bring joy to a child this Christmas?

We have a list of children, ages 3 to 11, who are at risk of not receiving a Christmas present this year. As the cost-of-living crisis intensifies, more families are struggling.

If you would like to support us, we will supply you with the name and age of a child, along with a suggestion from their teachers or parents of what gift they’d like to receive.

We'd love to see you at Christmas Drinks on Wednesday, December 7th at 5.30 pm in Bar Soba on Hanover Street in Edinburgh, where you can hand in your gift and enjoy a drink and a snack with us!

Please RSVP to lucy.edgar@merakitalent.com to let us know you can join us.

If you can’t make it along on the 7th, you can send the gift to Meraki Talent, Orchard Brae House, 390 Queensferry Road, Edinburgh, EH4 2H, or we’d be happy to pop along to your office and collect the gift at any time before the 12th December.

Remember to label the gift with the name of the child, their age, and school. We would really appreciate your help with this appeal! 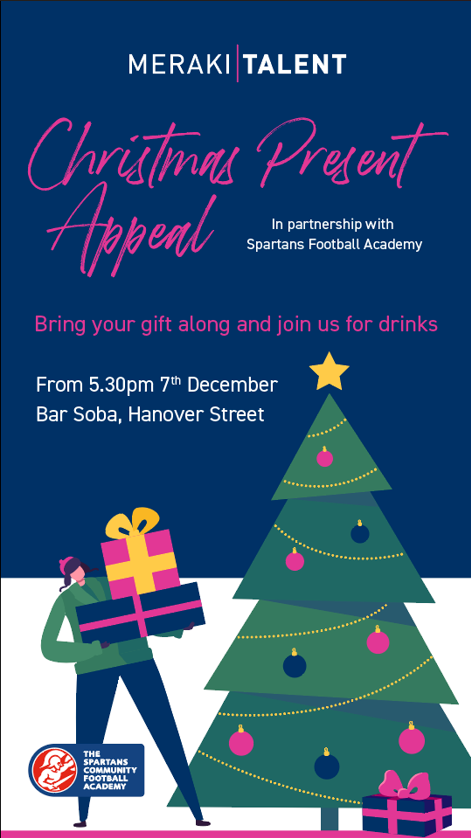 Take your next career step.